How many times have you heard a politician say, “Government needs to be run more like a business”?  Unfortunately, every time the public sector has a chance to do exactly that, those same politicians suddenly have a change of heart.

The latest example is the persistent failure of the Republican controlled Congress to support major investments in U.S. public works while interest rates are at historic lows. Compare that to the private sector.  Every car dealer, furniture store and realtor is encouraging consumers to buy their products at little or no interest.  Buyer Reports lists 21 manufacturers who are offering zero percent loans on many of their 2015 and 2016 models.  Corporations were encouraged to investment in new plants and equipment, taking advantage of Federal Reserve near-zero discount rates.

What does this mean in real dollars?  If you borrow $1,000 at three percent for twenty years (the average term of a public bond), it will cost you $331 in interest.  In contrast, if you borrowed the same amount at 0.5 percent (as was possible at the height of the recession), interest would total $51, a savings of $280.  Imagine if Congress had authorized a public works program of $10 billion in 2012, when interest rates were at their lowest.  The savings over 20 years would have been $2.8 billion dollars.

Seemed like the perfect time to make a smart investment in the country’s future.  Additionally, the injection of $10 billion into construction projects would have created a minimum of 200,000 employment opportunities, easing the impact of the recession on working families.  The private sector has responded.  Unfortunately, Washington did not get the message.

So the next time you hear your Congressman or Senator suggest government needs to behave more like a business, watch what they do, not what they say.

For What It’s Worth
Dr. ESP 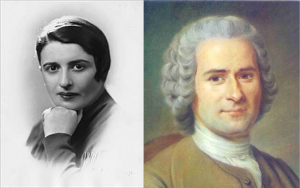 The May 12 issue of Time Magazine included an article titled, “American Capitalism’s Greatest Crisis.”  It included the following:

A couple of weeks ago, a poll conducted by the Harvard Institute of Politics found something startling: only 19% of Americans ages 18 to 29 identified themselves as “capitalists.” In the richest and most market-oriented country in the world, only 42% of that group said they “supported capitalism.” The numbers were higher among older people; still, only 26% considered themselves capitalists. A little over half supported the system as a whole.

Based on these data, the reporter concluded, “This is a majority of citizens being uncomfortable with the country’s economic foundation.”  What the reporter failed to realize is current economic principles and practices are NOT what the the founders viewed as the overarching philosophy on which American society should be based.  Remember, Ayn Rand’s Atlas Shrugged, which is touted by many conservatives as holding the keys to American economic exceptionalism was published 168 years AFTER adoption of our Constitution.   When was the last time the “foundation” of any structure was added a century and a half after the enterprise opened for business?

Adams, Jefferson and Franklin relied more heavily on Jean Jacques Rousseau’s The Social Contract, in which the French philosopher espoused the importance of community responsibility to the survival of civilized societies.  Rousseau did not believe capitalism and socialism were incompatible.  Instead, he saw them as complementary.

If this philosophy is applied to the topics of wealth and taxation, the world is not made up of “makers” and “takers.”  Everyone is a “maker.”  Businesses use private capital (i.e. investment) to produce goods and services.  Likewise, government uses public capital (i.e. tax revenues) to provide basic services such as national security, police, fire production and education as well as infrastructure (e.g. highways, airports, water and sewer systems) without which commerce would not exist.

In the 2012 election, President Obama muddied the waters when he suggested that business owners “did not build that.”  While he argued the sound bite had been taken out of context, it opened the door for opponents to argue he did not value the importance of private initiative. Here’s what he should have said. “Together we build a strong economy.  Privately held businesses marshall resources to fulfill the needs and desires of the marketplace.  Yet, at the same time, governments and non-profit organizations deliver public goods and services so the private sector can focus on what it does best.”

The private sector is the primary job creator. But just as President Obama misspoke when he tried to explain the the synergy between the public and private sectors, Republicans have done an equally bad job of articulating the role of the private sector in job creation.  First, it is not only the wealthy who are the “job creators”.  Entrepreneurs emerge from every income tier.  Second, business owners create two categories of jobs.  They employ personnel DIRECTLY in their companies.  When they pay taxes, they also INDIRECTLY create public sector jobs and should be given credit for that.

If there is anyone who should be labeled “takers,” it is those individuals and companies who can well afford to pay their fair share of taxes, yet avoid them and shift the financial burden of public goods they use in the course of business to other citizens.  I can hear Rousseau now.  “You are violating the contract on  which civilized societies depend.  Return to it and all those young people just might begin to realize that capitalism is critical to the world in which they live.  Next year, Time will have articles about how capitalism survived this crisis.”

ned again this weekend.  I guess the media never heard of “Occam’s Razor,” the problem solving principle which suggests, given a number of hypotheses, the one that requires the least assumptions is most preferable.  In more modern terminology, it is much like the acronym KISS or “keep it simple stupid.”

Yesterday, CNN reported on the sudden emergence of a 1991 interview between a “publicist” for Donald Trump and People Magazine writer Sue Carswell.  From the tape and transcripts of the interview, it is fairly certain Trump was using the pseudonym John Miller to brag about himself.  At first, everyone assumed Carswell or People Magazine had released the tape.  However, she claims that she has the only copy of the tape and has never shared it. On CNN,  Carswell speculated that Trump may have also recorded the conversation and was responsible for its release.

The CNN reporter then asks Carswell, “Why do you think Trump or his people would do that?” Did you really need to ask?  Just watch your own broadcasts.  For the last 48 hours, CNN and other news outlets had focused on Trump’s unwillingness to release his tax returns.  Newspapers and his critics (e.g. 2012 Republican nominee Mitt Romney) peppered the presumptive nominee about what he might be hiding.  Trump was  being trolled on Twitter with the hashtag “#weakdonald.”

If I were Trump’s campaign manager, I would be polling to see if this was the “last straw” for many Republicans and, more importantly, independents.  Could my candidate, who constantly reminds us he tells it like it is, weather the hypocrisy of not applying this adage to himself?  I would have two choices.  The most obvious one is release the returns.  This would either quiet the critics, or as some have suggested, confirm charges that Trump overstates his net worth, is less charitable than he claims and/or pays little if any taxes. As campaign manager, do I want to take that risk?  Probably not.

Say what you will about Trump, he and his team are masters at manipulating the media. Therefore, the campaign team’s second choice is to change the narrative.  And that is what they did.  They offered a more succulent piece of red meat to the media and the critics.  A tape in which Trump lauds his own greatness disguised as a publicist.  The modus operandus of a true narcissist. But everyone already knows that.  One more piece of evidence to confirm something about which Trump enthusiasts and potential supporters have been exposed many times and don’t seem to care.

Look at the headlines over the last 72 hours in the Washington Post which broke the story on Friday.  At the end of the week, everything was about Trump’s tax returns.  This morning’s Sunday edition is about the tape.  No story about tax returns.  No op-eds about Trump’s lack of transparency.  The Trump campaign successfully pulled the entree off the table and replaced it with dessert.

There is one more question.  Why the Washington Post? Why not the New York Times, Trump’s hometown paper of record? Just this week, Trump re-opened his Twitter attack on Post owner and Amazon CEO Jeff Bezos, claiming the Post was anti-Trump because Bezos is afraid Amazon will be charged with anti-trust violations by a Trump Department of Justice. What is more satisfying than using a hated adversary’s asset as a prop for his reality show?

For those of you who think the purpose of this post is to criticize Trump, you are wrong. Each of you needs to assess the Trump candidacy on your own.  I personally don’t agree with most of what Trump offers, but as they say, a broken clock is right twice a day.  He is right when he chastises the media and calls them a disgrace.  However, I guess Trump and I reach that conclusion from different perspectives.

Trump is not the primary villain in this melodramatic magic show which turned “taxes” into “tape.”  He is only taking advantage of an audience that falls for his slight of hand and is afraid to ask how it is done.

rative was dominated by the release on social media of two stories about Ole Miss standout Laremy Tunsil. Minutes before the draft officially commenced, a tweet of Tunsil smoking weed surfaced on the internet. Later that evening, an Instagram post included text messages in which Tunsil asks for money first to pay his rent and second to help his mother with her utility bills.

Throughout the evening sports analysts suggested this lapse of character had cost Tunsil millions of dollars as he slipped from a predicted sixth overall pick in the draft to thirteenth. Lapse of character? Maybe a lapse of judgment for not complying with the archaic and unfair restraints on college athletes who generate billions of dollars for the NCAA, their universities and their conferences. In fact, I would suggest Tunsil showed more character than his coaches, the NFL, pro team owners who bypassed him in the draft and the sports reporters who were quick to question his character.

Compare Tunsil to other players in similar situations. First, he did not deny the situation or hide behind vague statements. When asked during a press conference, did he take money from a coach, he replied, “I’d have to say yeah.” Additionally, on the second occasion he asked for money, it was not so he could finance another keg party or pay for one more tattoo. He wanted to make sure his mother had electricity and water.

Finally, when are we going to ask NCAA officials, college coaches, NFL owners/general managers and sports reporters if they ever smoked pot? And if so, do they feel like they lack character? I think we know the answer.  Laremy Tunsil is 21 years old. He makes errors of judgement as we all do. Probably the worst was letting someone create a video of the gas mask bong incident. He cared about his mother’s well-being at his own risk. This latter situation suggests he cares about others more than himself. That’s someone I WANT on my team.

Kudos to the Miami Dolphins for ignoring the hype and giving this young man a chance. My money is on Tunsil to prove them right.