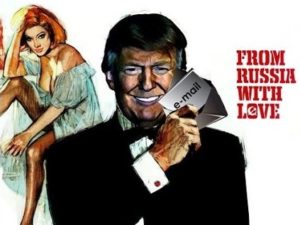 Political pundits, late night talk show hosts and Twitter had a field day Monday with this week’s attempt by the White House to distract from the latest James Bond sequel, “From Russia With Love: Putin on the Twitz.”  This new charade was anointed, “Made in America Week.”  Ironically, the only thing associated with the hypocrite-in-chief, actually manufactured in the United States, is Donald J. Trump himself.

There is no need to rehash the litany of foreign countries where most Trump brand products originate.  Instead, I choose to focus on the many ways he emulates a range of behaviors which unfortunately are becoming the norm in many walks of life in America–rationalization, finger pointing, entitlement, exaggeration and narcissism.  Sadly, I observed many of these same practices among students and their parents during my nine years at Miami University.  Here are just a few instances in which Trump’s own words and actions demonstrate he is a product of the decline in personal responsibility and traditional values in the United States.

Even though most Trump brands are manufactured outside the United States, there is no doubt Donald Trump was “made in America.”  The irony, of course, is his predecessor, whose childhood was “partially assembled” in Jakarta, Indonesia exemplifies many personal traits which we used to expect from our leaders.

Forty times during the 2016 presidential debates between  Donald Trump and Hillary Clinton,  Trump used the phrase, “Believe me!”  (Source: Quora.com, March 8, 2017)  Among the promises which preceded these two words were:

As I have mentioned on numerous occasions, Trumpism is a highly infectious disease and should be monitored constantly.  The latest strain seems to have affected many Republican members of Congress following their self-made phelgethon (mythical stream of fire) following the defection of enough Republican votes to doom the revised Senate health care bill.

Yesterday, Senate Majority Leader Mitch McConnell proposed a last ditch effort to grab disaster from the jaws of defeat, repeal the Affordable Care Act with a promise to enact a replacement within two years.  In other words, Republicans are promising to do, in two years, something they could not do in seven years.  Since the announcement, several Republicans have appeared on cable news shows supporting this approach.  When challenged whether the timeline is realistic, more than one responded, “Yes.  Believe me. We can do this.”

The ONLY thing we should believe is these legislators failed to get their Trumpism inoculations which, BELIEVE ME, should be covered under the Affordable Care Act if it is not already.

3 thoughts on “Definitely Made in America”